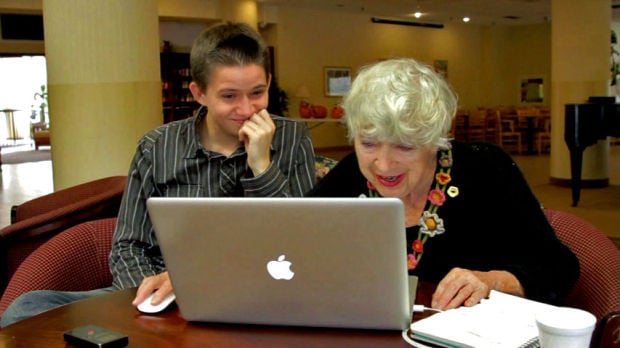 Amused high school senior Max sits back and watches 88-year-old Shura attempt to learn how to navigate in “YouTube.” This is one of many comical scenes in the new Candadian documentary “Cyber-Seniors – Connecting Generations” to be shown at the Stromsburg Civic Center Tuesday.

STROMSBURG — A new documentary all the way from Canada potentially has the opportunity to make a generational impact on Polk County’s small town seniors.

The Stromsburg Civic Center and Polk County Senior Services have teamed up to bring “Cyber-Seniors — Connecting Generations,” a comical, touching, frustrating, educational documentary about bridging the technology gap between senior citizens and seniors in high school.

Four months ago, Polk County Senior Services Director Jan Noyd received an email out of the blue from a film company she had never heard of, telling her about their new mentor-oriented program based on their new documentary.

This was everything she has been striving for.

“It was truly a dream come true,” she said.

Since she began as the director nearly three years ago, she has been brainstorming ideas to try and give the nearly 500 area seniors more independence while challenging their skill levels. She wanted to bridge, not only the generation gap but also the technology gap.

“I had this idea about getting high school kids interested in teaming up with seniors. Seniors have so much to teach high school kids. There are a lot of arts that are being lost like knitting, crocheting, quilting, baking, even cooking,” she said. “And we need to teach these senior citizens how to use the internet, especially in small towns.”

She has recognized that fewer younger people are settling in small towns as they are attracted to the big city life. But she still wants parents and grandparents to be able to easily stay in touch with their children on a weekly or daily basis.

“If they learn how to Facebook and Skype, they can keep in touch to watch their babies and grandbabies grow up,” she said.

Two teenage sisters from Canada, Macaulee and Kascha Cassaday taught their grandparents, for fun, a life-changing skill, which many take for granted — how to use the Internet. After seeing how much of an impact this had on bringing their family together the two sisters turned it into a class project. Their idea was to get the seniors from their high school to interact and mentor senior citizens, teaching them savvy social-media skills.

The two sisters had a third sister, Saffron Cassaday. She started merely observing the interaction, but after she saw how interesting the chemistry between the two ages were, she found it to be worthy of more than just observation. She wanted to document it on film.

Don’t let the film genre scare you. It isn’t just senior citizens poking at laptop keys trying to find the power button or wondering why it doesn’t sound like a typewriter. The film quickly turns humorous as the high school seniors and their mentored senior citizens go head to head in a social-media popularity contest, mixing the production of YouTube videos with Facebook page “likes.”

“I need more hits,” 88-year-old Shura exclaimed at one point in the film, regarding the YouTube video she created.

Even though the idea behind the documentary is seniors teaching seniors, Polk County Senior Services is accepting volunteers from sixth grade on up and seniors as young as 60.

Noyd’s goal is to connect area schools with area centers, using the town’s library as their resource. She said so far she has had an outpouring of response but is still looking for more volunteers. She hopes this can become an after-school program as soon as September.

“I think it has the potential to change lives, opening a whole new world to senior citizens and teaching the mentors that grandma and grandpa aren’t boring folks who don’t have a clue about anything. They’re funny, cool and they know a lot,” she said. “It’s not an experiment, it’s a service.”

For additional information on the program or volunteering call 402-764-2252.